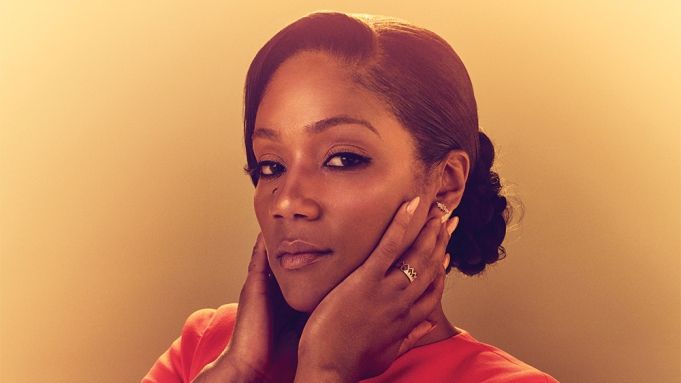 TBS has enlisted Tiffany Haddish to host “Friday Night Vibes,” a weekly movie showcase that will feature wrap-around segments with the comedian and guests.

Haddish’s new venture with producer Reginald Hudlin was among a number of programming announcements unveiled Wednesday by WarnerMedia at the company’s annual upfront, including a plan to give HBO and HBO Max original series second-window airings on TNT and TBS. The shock of Monday’s news that WarnerMedia is set to spinoff of AT&T and merge with Discovery has greatly overshadowed the company’s programming announcements for its ad-supported cable networks.

But the upfront presentation that was scheduled long before Discovery and AT&T sealed the deal went ahead as planned, complete with remarks from WarnerMedia CEO Jason Kilar, who is expected to bolt after being unpleasantly surprised by the secret merger plan.

In its upfront pitch to advertisers, WarnerMedia referred to its linear general entertainment cable networks TBS, TNT and TruTV as “TNets,” a sign that the company is looking to program them as a block at times.

“The TNets have been invited into consumers’ homes for decades and our fans know they can continually turn to us for quality programming that fits their emotional need: a good time, a good laugh, or a thrill ride,” said Brett Weitz, general manager of TBS, TNT and TruTV.

“We know viewers discover content in a variety of ways, and with ‘Front Row’ we are giving more of them an opportunity to encounter our groundbreaking Max Originals,” said Tony Goncalves, exec VP and chief revenue officer for WarnerMedia. “To put it simply, we’re growing audience. That’s valuable to each and every one of our partners from distributors.”

Those programming umbrellas are designed to run with fewer commercials as a bid to keep viewers more engaged in the movie.

Haddish’s series is set to bow June 18 at 7:30 p.m. with 2015’s “Creed” followed by 2018’s “Creed 2.” The movie selections will emphasize artists from diverse and underrepresented backgrounds. The wraparounds will feature Haddish interviewing celebrity guests as well as musical performances and a regular DJ. Haddish and Hudlin previously worked with TBS on the Tracy Morgan comedy “The Last O.G.”

Hudlin is executive producing with Phil Gurin of Gurin Co.

“I’ve wanted to work with Tiffany again since we did ‘The Last O.G.’ together, and ‘Friday Night Vibes’ is a place where we can celebrate great movies, play great music and hang out with funny and insightful guests. It’s the best way to spend your Friday night,” Hudlin said. “Let’s watch movies and have some fun,” Haddish enthused.

When you visit our website, it may store information through your browser from specific services, usually in the form of cookies. Here you can change your Privacy preferences. It is worth noting that blocking some types of cookies may impact your experience on our website and the services we are able to offer.